Home  >  News & Events   >   Telling it Like It is: Combatting Ageism – report calls for an Independent Commissioner for Ageing and Older People

Telling it Like It is: Combatting Ageism – report calls for an Independent Commissioner for Ageing and Older People 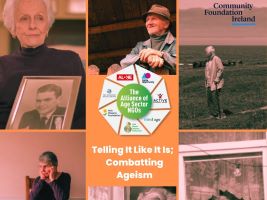 Today, The Alliance of Age Sector NGOs* launches its 2023 Report, ‘Telling It Like It Is; Combatting Ageism,’ which sets out why Ireland needs to take ageism seriously and take meaningful action to counteract it. The report highlights the nature and impact of ageism in Ireland and offers several evidence-informed strategies to reduce it.
Ageism arises when age categorises and divides people in ways that lead to harm, disadvantage and injustice. Ageism is ever-present and has considerable harmful effects, including a shorter lifespan, diminished mental and physical health, isolation, lost commitment to the workplace, cognitive decline, and reduced quality of life.
The report includes nine actions** which, when implemented, will reduce the stigma and ill effects associated with ageing. The most pressing of these actions is the appointment of an Independent Commissioner for Ageing and Older People – similar to that in place in both Northern Ireland and Wales. The Alliance believes that the establishment of a Commissioner for Ageing and Older People would support our ageing population by actioning a programme for government which prioritises older people. It would ensure that all the commitment to mainstreaming ageing is kept to the fore of policy and decision-making and that there is enhanced investment in programmes and services to combat ageism nationally.
On behalf of The Alliance ALONE, CEO Seán Moynihan said: “The Alliance is urging the Government to establish an Independent Commissioner for Ageing and Older People. This would help to ensure that Ireland’s various policy commitments relevant to older people are meaningfully monitored and that older people are treated with respect and on an equal basis with the rest of the population.”
Chief Executive of Community Foundation Ireland Denise Charlton said: “This research underlines the critical need to combat ageism which is not only pervasive but also largely unrecognised and unchallenged. True equality means everyone’s voice is heard, no matter what, regardless of age or background. The Foundation remains committed to working with older people and their supporters to end this.”
The Alliance Member and The Alzheimer Society of Ireland CEO Andy Heffernan said: “The pandemic, in many ways, created a simplified view of older lives in public discourse – as homogeneous, vulnerable, isolated units readily cut off from families, friends and activities. Since joining the sector, I have found Minister Butler to be engaged and proactive regarding the lives of people affected by dementia. The Minister worked with us to find innovative solutions to isolation for people living with dementia during COVID-19, and I look forward to continued engagement as we move forward to ensure people affected by dementia are active and valued members of their communities.”

*ABOUT the Alliance of Age Sector NGOs
The Alliance represents the collective thinking of seven significant NGOs working in the age sector, uniting their learning from working with the diversity of older people and the issues that older people face. The seven-member organisations are Active Retirement Ireland, Age & Opportunity, ALONE, The Alzheimer Society of Ireland, Irish Hospice Foundation, The Irish Senior Citizens Parliament and Third Age.

**Telling It Like It Is; Combatting Ageism Actions
The nine actions include:
• Establishing a Commissioner for Ageing and Older People.
• Developing a Media Language Guide.
• Developing a joint Government-Alliance-led awareness campaign.
• Identifying and revising existing ageist policies and practices to reduce ageism and address age discrimination.
• Invest in education and training interventions to reduce ageism.
• Facilitating intergenerational contact interventions.
• Investing in Data Gathering.
• Supporting the private sector to develop and implement interventions.
• Developing the capacity of employees and employers to detect, report, and respond to ageism.

What is Ageism?
Ageism means that older people are often associated more with the past than the future. Ageism refers to the stereotypes (thinking), prejudice (feeling) and discrimination (action) directed towards others or oneself based on age. Not all of it is deliberate; unconscious bias about older people pervades Irish society.

Why an Alliance of seven national organisations?
Ireland is ageing fast, and our economy, health service, communities and families need to adapt. Although many Government Departments and Agencies play an important role, we still need to have a coherent, active and measurable national strategy supported by a structured, whole-of-government, cross-Departmental approach with senior-level Government engagement and oversight.