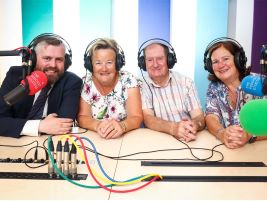 A new audio series ‘The Old Country’, which explores healthy ageing in Ireland, is to begin broadcasting on community radio stations around Ireland from today (25 May 2022), in partnership with CRAOL. The series is produced by Active Retirement Ireland, the country’s largest representative body for older people, which announced the syndication at its AGM today.

‘The Old Country’ was first launched as a podcast last July and was previously only available to stream through internet listening services, such as Spotify and iTunes, as well as on the Active Retirement Ireland website. Now, a number of community stations across the country are on board to broadcast the episodes, including Liffey Sound, Dublin South FM, Connemara FM, RosFM, and more.

Commenting on the announcement, CEO of Active Retirement Ireland, Maureen Kavanagh, said: “I am delighted to announce our partnership with CRAOL Community Radio Ireland and the launch of our podcast series ‘The Old Country’ on community radio stations around Ireland. Across the 12 podcast episodes, our guest speakers — from older people to experts in fields of gerontology, human rights and inclusion — give a picture of ageing in Ireland that is both a reflection and a yearning to create a country that is a better place to grow old, now and into the future.

“The podcast was recorded during the pandemic and during a time when we saw older people lose their agency and their voice and really struggle to get it back. While we can reflect on this and the impact that Covid-19 had on older people’s lives, we also need to take this opportunity to learn from it, to move forward and recreate an Ireland where everyone is valued and respected. This message is not just for older people. Ireland’s population is getting older, it is in everybody’s interest for our country to be a better place to be an older person.”

Also commenting on the announcement, CRAOL Community Radio Ireland Honorary President Jack Byrne said, “Older people will find a welcoming, respectful, and creative space in community radio. Already many older people have found community media can provide outlets for their aspirations, for forming new friendships and for giving them a voice on matters of concern.”

‘The Old Country’ audio series examines the challenges and opportunities around an ageing population and covers issues around ageing, such as age-friendly environments and combatting ageism, as well as integrated and long-term care.

‘The Old Country’ was created to mark the beginning of the UN Decade of Healthy Ageing and is supported by the Community Foundation for Ireland.

A directory of Ireland’s community radio stations is available on the CRAOL website at www.craol.ie/stations/directory