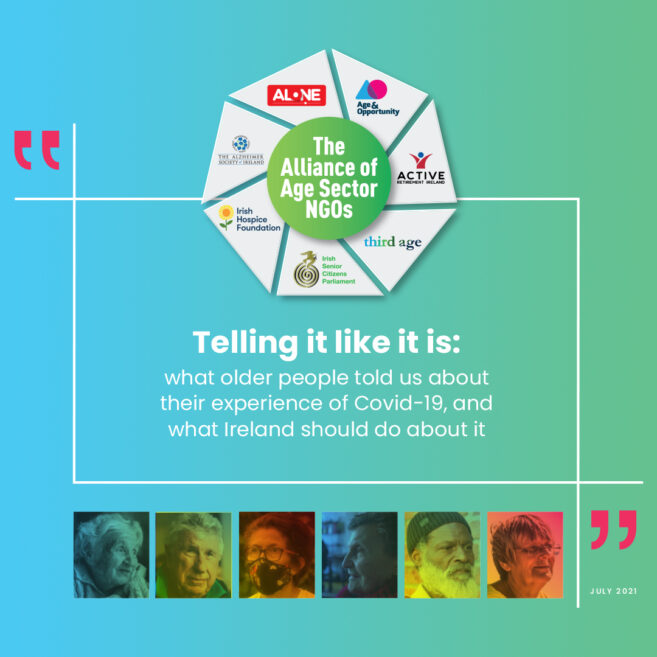 Older people have expressed the heightened challenges they faced during COVID-19 and called for a post-pandemic focus on regaining their positive role in society – according to a new hard-hitting review launched today.

The review draws together seven leading older persons organisations to capture the experiences of older people during COVID-19, the impact it had on their lives – and what now needs to happen to address this.

The report was released today by the Alliance of Age Sector NGOs (the Alliance), who are working collaboratively to concentrate a shared focus on progressing policy, services and resources with older people.

This is the Alliance’s first publication and is an unfiltered account of older people’s lived experiences during COVID-19, as told in conversations, surveys and focus groups involving thousands of older people across the country.

The analysis explains how many of the events that happened during the COVID-19 crisis affected older people disproportionately including:

Alliance member and Irish Senior Citizens Parliament CEO Sue Shaw said: “The pandemic affected everybody in different ways, and of course public health actions needed to be taken to protect health and lives were saved. However, this account shows that for most older people the negative effects of the pandemic restrictions were very significant, wide-reaching and diminished their role in society. It took away older people’s right to make their own decisions.

“While public health authorities were operating in very difficult and uncertain circumstances, we need to face up to the fact that some of the strategies used to deal with Covid impacted very negatively on many of the other social determinants of older people’s health and wellbeing by isolating so many from the people, activities, services and supports that make life positive and worth living.

Alliance member and The Alzheimer Society of Ireland CEO Pat McLoughlin said: “This report asserts that older people’s experience of the COVID-19 crisis could have been less extreme if there had been more consideration of how pandemic measures would impact them – and more meaningful consultation.

“It shows that ageism was lurking behind many of the decisions that were made. Older people loathed the word ‘cocooning’ – as fundamentally ageist. People’s health deteriorated as non-Covid health services were cut back and there were less opportunities for exercise. Not surprisingly, the incidence of depression rose.

“There seemed to be little consultation with older people or with NGOs. More comprehensive consideration of how pandemic measures might impact on older people would have helped to avoid the kinds of unintended consequences reported.”

Sue Shaw said the Alliance was now calling on Government to:

Looking to the post-pandemic period she said regaining the positive role of older people now needs to be an integrated part of Government planning.

“What older people want are connection, friendship, dignity, choice and support – ordinary aspects just like everybody else. Most older people also want to stay in their own homes and communities until the end of their lives.

“The pandemic showed that living at home was safer, in many instances, than living in a nursing home. Lots of European countries support ‘ageing in place’ – staying in your own home, with a coherent system of support. It’s proven to save money as well. Ireland lags behind.

“We need coherent, joined up, reliable services, responsive to older people’s evolving needs, delivered by skilled and valued workers, so that older people can stay in their homes and live well to the end.”

The Community Foundation for Ireland Chief Executive Denise Charlton, which is supporting the work of the Alliance, said: “Older people make up a vital and growing part of the Irish population and are active citizens, not passive recipients. Excluding older people diminishes all of society and loses a huge reservoir of experience and creativity”.